Industry Diary: new waves of pitching and outreach this Fall!

So when we can, we like to show you under the hood at WriteMovies to reveal how we pitch your scripts and progress our productions and ventures in the industry. Things often go quiet from July till mid-September, for example because producers are often filming or on holiday, so there’s a lot to pick up right now – which makes this a great time to look ahead in our new Industry Diary! And we’ve got a lot to plan for: resale of our feature film THE LIST, potentially producing a new feature film, pitching our winners, project selection for eminent directors we work with, online sessions and other collaborations – to name just a few.

Our thoughts are with everyone affected by the September 11th 2001 attacks and their consequences today. It’s a fitting day to take stock, and that’s what we’re doing. We’re filling you in as the day progresses, by adding to this article through the day – keep coming back every few hours or keep up on our social media to see what I’ve added!

So let’s start with THE LIST, a high-quality feature film we produced from a WriteMovies award-winning script, one of dozens of scripts we’ve got optioned or produced over the years. I’ve created a new page to reintroduce it here – and here’s what the page looks like: 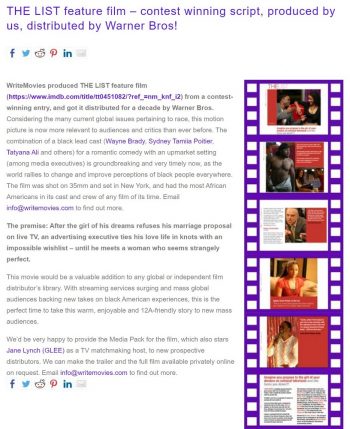 As you might have seen earlier this year in my L.A. Diary, the film was distributed by Warner Bros and I recently collected the media assets from them – you can see the story of that here. Since then I’ve had some interesting conversations with different media lawyers about the best way to take it forward in the new distribution landscape. So, I’ve got a list of distributors and sales agents to approach, I’ve put together an email introducing the film and its attractions for distributors in the new era, especially considering its enduring resonance to the Black Lives Matter movement – I’m told that no film hired more African Americans than it did that year, for example. And now I get to take it to them in the days and weeks ahead!

My featured L.A. Diary pieces came just before the COVID-19 outbreak started to bite, and the world has looked very different since then. I was expecting to be able to continue the series but the lockdowns shut normal business down and producers have been fighting to save their current productions and rebuild their release schedules. It’s been a challenging time all round, but companies have also used the time to develop their slates and future planning, so pitching has continued.

Reviewing what I said about the outbreak at the beginning of the lockdowns (which we published here), I’m struck by how little has actually changed in the 5 months since I made the assessment I did then. I stand by the recommendations I made to help writers get themselves and others through this time – and if you’ve been suffering yourself, take another look and see if what I recommend can work for you too. Like I advised all writers to keep doing during the crisis, I reached out today to one of our colleagues who’s had a tough time during lockdown, to see what we could do to help. The crisis has affected people in very different ways; a scriptwriter friend of mine was telling me a few weeks ago about an award-winning filmmaker friend of his who committed suicide a few months into lockdown, and from things he had said to my friend in the months before, it was definitely no coincidence. Keep thinking of the people you know and whether they might appreciate a friendly wave right now. The discussion with my colleague actually turned into a really positive and fruitful one. 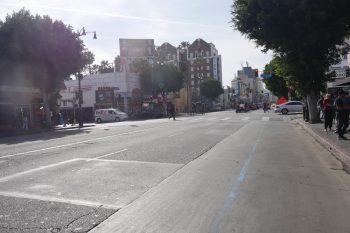 New partnerships have been a big positive of the lockdown – lots of our colleagues and network are in a similar situation to us and that has brought opportunities as well as challenges. We’re working with a fresh-minded creative entrepreneur to produce some joint online courses for writers’ to manage their career progression – your thoughts about what you need will really help us develop them to your needs so please complete this 5-minute survey if you get the chance. Following my latest conversation with her and another colleague, we’ve progressed our planning for the courses, and potentially other ways to work together in future. I’ve also brought forward plans to integrate WriteMovies with other screenwriting sessions I’ve been coordinating for many years, bringing those sessions live online into the Zoom era.

Another partnership that progressed today was between myself and our Senior Script Analyst Edward Smith. With filming so restricted under lockdown, we’re revisiting a high-concept low-budget psychological thriller I’ve had in the pipeline, which could fit really well with filming under the COVID-19 restrictions. With many normal productions unlikely to begin filming in the short term, now could actually be the perfect time to make it happen, and Edward has already succeeded in filming and editing a theatre production with social distancing measures in place. Watch this space.

This is just the start – so yeah. There’s a lot to talk about right now! Keep up with my Industry Diary in real time on our Twitter, Facebook, Instagram and in these articles to get the latest as our projects play out!