But before that, we promised to share a week of Ian’s L.A. Diary from the beginning of March – and here’s Part 3! We GUARANTEE to get our winners’ scripts in front of top producers with the power to say yes and make things happen, and this sneak peek gives you an idea how. Here’s what Ian got up to on Wednesday March 4th…

So today I had two long crosstown trips to make. First was to Warner Brothers, where I had to check and collect the movie assets they had distributed for a decade from the film WriteMovies produced in 2006 – THE LIST. It’ll be really exciting to open new doors for one of our greatest success stories – a charming New York rom-com written by our winner Marcus Folmar and starring Wayne Brady, Sydney Tamia Poitier and Jane Lynch among others – but at this moment the focus was purely on the nuts and bolts: cross-checking the inventory, ensuring all the assets are present and indexed and in good condition, packed and ready for shipping. 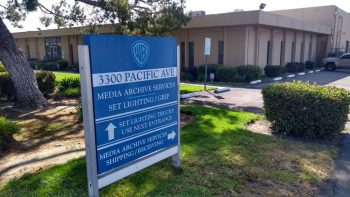 I took my time to check that all of the details were right, because you can’t expect to be able to go back after the fact, to argue that something should have been there but wasn’t. I videoed the contents of the pack and inventory too, in case we ever need that for reference. Some things you only ever get one chance to do right, and this was one. Thanks to WB staff for their help throughout the process! As you can imagine, their media archive is a vast and (as far as I could tell at this point!) meticulously indexed warehouse facility, and was a fascinating place to visit and spend time.

So, one big box heavier, I set off from Burbank to Marina Del Rey, an hour away, to meet double Oscar-nominated and double BAFTA-winning VFX expert Habib Zargarpour (THE JUNGLE BOOK, BLADE RUNNER 2049, and much much more including Tom Hanks’ imminent GREYHOUND). Habib is now Head of Film Development at Digital Monarch Media, a division of Unity Technologies, and welcomed me to meet his groundbreaking team managing film for a company within Unity Technologies. I spent time getting to know the team, and catching up about the latest filming for THE SQUADRON (directed by Habib and produced by our founder Alex Ross). 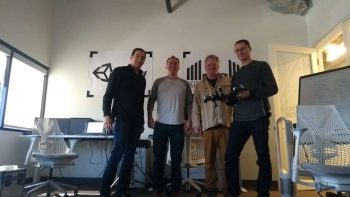 Ian (right) getting to grips with amazing real-time VFX capture equipment, with Habib Zargarpour (left) and his colleagues at Head of Film Development at Digital Monarch Media, a division of Unity Technologies.

Then they took me along as a visitor to a demo they were doing for a fascinating film school, who it was great to meet and get to know as well. Then we all came back to the company office where Habib and his team showed how their latest equipment enables directors to generate – and customize – their VFX in real time. This technique proved extremely effective when they produced the VFX for THE JUNGLE BOOK live-action/CGI remake and we look forward to sharing much more about their unique work and tools with you in future. In the meantime, massive thanks to Habib for his team’s hospitality and help with our media assets from Warner Bros!

Next, another lengthy cross-town trip later, I liaised with further candidates for the new role we’re looking to add to our team, and caught up on emails – with so many exciting meetings happening, it’s vital to follow up what’s been agreed and discussed thoroughly. Emails are important to confirm them and start to make things happen and take industry interest in us to the next level every time: vital details are easily missed or forgotten in the rush of other work if not, and could come back to bite you if you can’t show a trail of substantive evidencing for them. And meanwhile, not forget to check in for the next meetings and confirm any extra details.

The logistics of a week like this in LA are vital to its success, and agreeing the wrong number of meetings or times that don’t work with each other can undo all your good work getting this far.

Want to see more of Ian’s diary? Check out how he prepared for pitching on Monday HERE and how his meeting went with Shaun Redick (GET OUT, BLACKKKLANSMAN) and Yvette Yates of Impossible Dream Entertainment HERE!