GREASE is the word…

Chapter by Alex Ross in a book exploring a cultural phenomenon!

His upcoming book BLOCKBUSTED isn’t the first time our founder Alex Ross has published his in-depth research in a book about iconic movies and cultural milestones. Alex is already the proud author of a chapter in a book with insights into the smash hit musical which starred John Travolta and Olivia Newton-John in cinemas. The book was edited by Oliver Gruner & Peter Krämer and released by Anthem Press, who describes the book as “Bringing together a group of international scholars, ‘Grease Is the Word’ offers fresh insight into the impact and legacy of the cultural phenomenon that is Grease.” 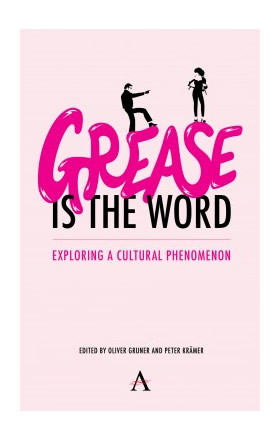 Chapter by Alex Ross in a book exploring a cultural phenomenon!

Alex’s chapter explores the production of GREASE. You can buy the book from booksellers, or direct from the publisher here:

Just another taste of the fascinating insights Alex will be unveiling this year when BLOCKBUSTED is released! We can confirm that the release date will be in May! Watch this space…

Blockbusted is a new book charting the evolution of Hollywood’s calculated blockbuster, and will be released in the coming months – but the book has already been recognized and acclaimed by leading industry professionals. It’s even challenging the industry’s long-held assumptions, as you can see below. Check out these first endorsements – just the start of the industry acclaim for Blockbusted we’ll be updating you with over the coming months. Get the input of the book’s author Dr. Alex Ross into your own project at here – or email us at info@writemovies.com to get the ball rolling!

“This book outlines in extensive and unique detail how studios make money not just on blockbusters, but also eventually from all movies, as Alexander Ross uses his vast experience, inside knowledge, and scholarly expertise to lay out both the successes and the mistakes of the ‘blockbuster era.’ I highly recommend it to scholars in film studies and business, film school students working toward a career in the film industry, and budding film producers and studio executives.”
– Hal Lieberman, Former Head of Production at Universal Pictures

“You are holding a volume which, to my relatively seasoned mind, adds a unique contribution to text-based cinema studies. This book is a persuasive, rigorously researched study of the evolution of the contemporary Hollywood blockbuster. It lays down a parallel track which posits an apparently astonishing argument, flagrantly challenging a long-held bit of supposed critical wisdom – William Goldman’s oft-quoted dictum that “nobody knows anything.” Indeed, Alexander Ross maintains that certain players inside The Dream Factory’s upper echelon of studio chiefs, producers, and mega-agents are not only intelligent, sophisticated mavens, they actually know what they’re doing.”
– Paul Sammon, film industry professional and author

These are the first examples of the industry acclaim for Blockbusted we’ll be sharing with you over the coming months.

Essential reading for screenwriters this year! The history of the modern Hollywood blockbuster, with dozens of awesome interviews!

We’re proud to announce that this year Dr. Alex Ross will be publishing his new book BLOCKBUSTED – a history of modern Hollywood blockbuster films, packed with amazing industry interviews and insights. Film fans are going to love this!

The book is due to be published in May or June. Alex says: “every fan of The Godfather, Jaws, Star Wars, ET, Back to the Future and Blade Runner will want to find out more, as the book will provide never before shared insights.”

We’ve got lots of insights, endorsements and extracts from the book to share with you over the coming months… let the countdown begin!

Click here to see what Alex can do for you!