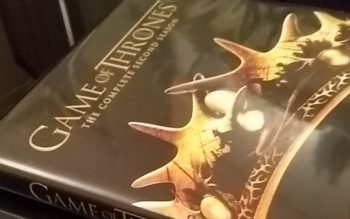 In readiness for the eventual arrival of the final season, Ian Kennedy subjects himself to the whole thing again. Next up is Game of Thrones Season 2… Can anyone endure Ned’s honor, Stannis, the Red Wedding, and – worst of all – Arya’s unending journey from ‘annoying’ to ‘a different kind of annoying’, all over again? Or will the quality of the writing conquer all foes once more? Spoiler central here, if you hadn’t guessed… but in euphemisms that would make Tyrion blush, most of the time. 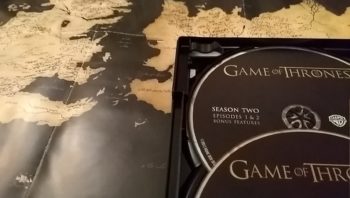 Not easy, introducing and reintroducing so many characters and backstories after nearly a year, with so little screen time for each of them. To make this work, the first episode of Season Two presents some unflinching violence and dark exchanges to make clear who’s in power and who’s powerless in every scene, and how they choose to use those positions – which is a great way to reveal true character, in life-or-death exchanges.

For example, in a fatal tournament for Joffrey’s amusement, we’re introduced to a minor character who is almost killed at the young king’s command. But after surviving thanks to Sansa’s intervention – even when both stand in a position of apparent powerless – he gets a small but vital role later in both Joffrey’s and Sansa’s fates.

These pieces of poetic justice underline how fine the line between success and death is in the series (“you win or you die”, of course!). Cersei holds court, proving her intention is to rule the kingdoms herself – but only to discover that Tyrion has superceded her, and she’s been out of her depth. She still gets her chance to belittle Littlefinger afterwards and teach him a lesson in power – very well-written and wryly dismissive of one of people’s favorite sentimental maxims, that knowledge is power. It’s a good crystallization of the underlying lessons of the series, and sets Littlefinger to change sides later. Meanwhile, the Lannisters start a campaign to slaughter all of Robert’s bastards – since they all have a better claim to the throne than the new king does!

Dany, her baby dragons, and her few dozen followers have their time in the wilderness. The Night’s Watch visit the creepy Craster’s Keep, and we’re introduced to Stannis in another creepy situation, which comes to a head with a fascinating failed poisoning attempt on his sorceress: it’s in situations like these that the series shows its distinctiveness. Robb shows he does have an exit stategy even while the war is going well for him. There are some absorbing exchanges and scenarios, but with an anticlimactic ending and no real fights or battles, it’s a bit of a flat episode by the series’ usual standards. 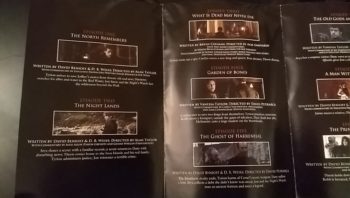 With the series fully in its flow by now, it seems rude to interrupt it by writing about it. There’s lots to relish here second time around, from Brienne’s entrance, Tyrion’s astute politicking and spectacular fleeting military triumph, to the Hound’s crisis of confidence in the midst of the Battle of the Blackwater. It’s fun seeing Jaime still playing the villain; if anything he (or actor Nikolai Walder-Costau) is enjoying it too much, but it’s nice to have someone to hate. As usual, the ninth episode is the spectacularly good – or bad – one, as the Lannisters desperately try to save themselves from Stannis’ invasion.

The real joy of second-time-around is recognising all the minor characters as they appear and reappear. From Ros turning from Theon’s whore at Winterfell, to Ser Loris being the first to reveal himself as a rescuer of King’s Landing – and through it the Tyrell’s decisive change of sides. Recognising the surnames adds just as much value. This is definitely a must-watch-twice series.

One question though, other than Catelyn’s foolish release of Jaime. Why do Bran, Rickon and their guardians run from Winterfell at the end, when Stark allies are about to liberate the castle?

Enjoyed Ian’s thoughts on Game of Thrones Season 2? Take a look back at his thoughts on Season 1 by clicking here, and keep an eye out as we continue this series of articles with future seasons…