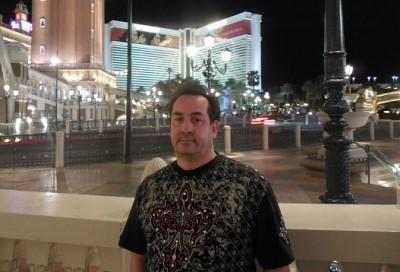 Myke receives a year of free script development from us worth over $3000 and our monthly prize of $200! To be our next winner, pick your contest and submit… our Spring 2016 Competition for international screenwriting ($2000 cash prize!) closes on the 29th, our Monthly contest on the 27th and UK Competition on June 14. https://writemovies.com/current-competitions-payment/

Thanks to everyone who entered this time! It was an intriguing set of scripts, each of which had different strengths. Our team didn’t reach a consensus about which of the other scripts should be named as semi-finalists, but we will be able to consider several of the entries at more length and gain further opinions for their entry to the main Spring 2016 competition (CLICK HERE to find out more). (Each of our contests has a different panel of analysts, so a result in one competition has no impact on a script’s prospects elsewhere.)

Myke Friscia has been writing screenplays for almost 20 years. He took his first screenwriting class at the California State University of Northridge as and hasn’t stopped writing since. After earning a B.A. In TV/Film in 1996, he spent five years working in film production. He then returned to his true love of the industry and began writing hoping to make a career out of it. He earned a certificate in Feature Film Writing from the UCLA writers program in 2008. He then began working as a screenplay reader. He’s read scripts for many top managers and agencies and is currently a creative executive. To date he’s written 10 original screenplays, 3 original TV pilots and loves writing shorts and comedy sketches, which number in the hundreds.

After completing the UCLA writers program he got the idea for Radio Haiti. The idea was brought to him by a producer associate of his that told him the incredible life story of the famous Haitian Radio D.J., Jean Dominque. Myke researched him heavily, watching documentaries and film clips and knew that this man’s life story needed to be told. The script tries to tell the key events of his career as it actually happened. Some things were added from Drama’s sake, but most of what happens is the script is how it was in real life, which makes the story more incredible.