Part Two of Alex and Habib’s Hollywood pitching whirlwind tour from early May 2018… Want us to promote your script in our next our next Hollywood pitching whirlwind tour, or other pitching? We are seriously looking for 2-3 scripts for 2x Academy Nominated and 2x BAFTA winning, Habib Zargarpour to direct. If you have what we need please participate in: https://writemovies.com/spring-2018-screenwriting-contest/ now!

Meeting with an Oscar winning VFX maestro and producer. The meeting was a real roll up your sleeves and get the film made type event. Tried to address issues such as the difficulties of doing a split rights production with one entity funding the film and another the game. There were issues of ownership, equity, and pre-sales brought up – all vital things that need to be considered. We had to rush into another meeting so followed up on the meeting via a video conference a couple of days ago. DS are happy to support us in getting the film made on a number of levels, which is really cool, this is the foundation of what Digital Sandbox is all about – helping productions with any aspects they need. We need as many experienced allies as possible. They  already have a beta site for Expozure, the Virtual Film Tools from Digital Monarch Media.

Every new director has strengths and weaknesses. Habib has an astounding background in handling visuals, but we cannot allow him to become one of these “technical” directors who deliver great VFX, but soulless performances out of his actors, he needs to deliver on both fronts. Also, in order to attract bankable actors, they need to trust the director, that he/she will make them look good. So we met a very experienced film/tv actor with a view to her helping Habib up his game in order to deliver on all fronts. She totally got it, loved his work and is aboard. 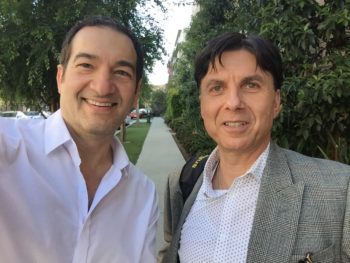 Met with the managing director. Awesome and intense dude. They are doing a lot of work in the ever-expanding Asian markets. They were already familiar with Habib’s work and are the VFX house that deployed Habib’s real-time project on The Jungle Book and Ready Player One, totally got the film/game angle and the vast revenue upsides we are targeting. They are presently evaluating our package and we are waiting to hear.

This is a big one. Former head of Universal Studios and someone whom Alex has known for over 15 years. According to Alex, “Hal is a class act and a fearsome producer. He gets it done”.

They felt that the best way of getting the project done was by directly going to one of the studios and having them fund and release both the movie and the game. Split-rights, pre-sales etc. are just too difficult… They were adamant that in order to succeed the project needed to be more than just a collection of enticing images, it needed to create an emotional connection. Which is totally on the money. Too many FX driven projects out there which fail, because you do not care about the characters.

They were “blown away” by Habib’s presentation and totally got it. They were very enthusiastic about the prospects and potential of the project and are presently reading the script.

Alex & Habib are presently integrating the feedback they received and positioning the project accordingly. The various production companies are reading the script. As soon as things have evolved, they will go back to take another slew of meetings with the goal of committing to one entity and getting the movie made asap.

Hopefully this gives you guys an idea of how we work with our sister company Talent Scout International Management (TSIM) to get your script to the industry. Hopefully a winning script from our current contest will be the next one we take to Hollywood, such as in a Hollywood pitching whirlwind tour like this. Make it yours with our Spring contest!