There’s no point anyone spending six months, two years, $80m or more on a script that has avoidable flaws. We all miss things in our own work that only an experienced professional can spot and help you rectify. If you put any value on the time and effort that your scripts require, then make the most of our other Summer Consultancy offers to take your writing and script to the next level.

We are offering summer discounts for our Judging Feedback (just $69 – normally $99), and Studio Consulting ($99- normally $129) and we are freezing the price of our Elite Consultancies at $299 – a unique price to get up to an hour of consultancy from a top studio executive in person! Well worth it to save months, years or millions of dollars on something you could have fixed much more cheaply much sooner…

A lot of writers think that they can start showing a first draft around and that the kind of folks in the industry will give them feedback and re-read their subsequent drafts until it works… Checkpoint reality! You get one shot. No one has time to give you feedback, most development execs only read the first 30 pages of a script anyway. As soon as you are logged in with a “pass”, word gets around (most executives exchange notes to avoid wasting their time and resources on bad scripts). A lot of places won’t even look at your script if it comes up as a pass next door. You can re-write it until you are blue in the face, until it really rocks, yet virtually no one will read it. Yes, you can change the title, use an alias and change the page count, but the log line will still catch you out. You can end up with the perfect script, yet you lost that race the day you went out with it the first time.

The only way you can avoid this colossal waste of your time, money, and emotions is to get the best development notes and studio coverage you can find as soon as your first draft is done. That’s where we come in… In the greatest possible detail, our Development Notes will address every issue your script has and provide you with creative suggestions on how to fix it. Knowledge is power, and this is the best form of empowerment available to smart writers who want to play the game at the highest level.We SO believe in what we do that if your script comes back with a “Recommend”, we will submit it to a pride of agents and producers, at no cost to you! All you need to do is commit to your project and make it real, by committing to us. PURCHASE NOW – options below! 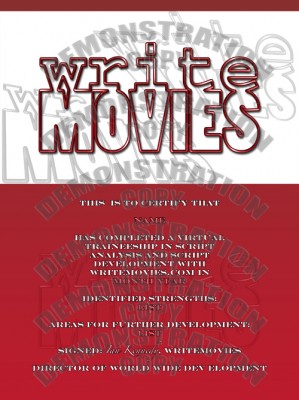 We also get our trainees to practice writing in these formats about produced scripts to sharpen their skills, and there are many examples of this on our website (athttps://writemovies.com/category/development-notes/). Here is an extract from a script report by trainee Daniela Piper-Vegh, based on a reading of produced script TITANIC:

“Characters/Dialogue:
The central love story between Rose and Jack is heartfelt and engaging. There is an element of chance to their meeting onboard the ship, making their love affair seem all the more precious and special. Rose’s romantic interest in Jack makes her a more appealing character, as it shows her wanting to break free of the restrictive upper-class shackles. Rose is able to experience an invigorating new-found freedom with Jack, allowing her to indulge in her passion for art. Jack and Rose’s relationship is filled with conflict, due to his lower-class status, and the fact that Rose is engaged to an upper-class Cal Hockley. Rose and Jack’s first prolonged interaction, with Rose attempting to jump off the side of the boat, is itself a powerful and dramatic moment. It is important that Jack does not seem to judge Rose for her suicide attempt, but instead helps her to keep her secret from Cal and her acquaintances. It is touching when Jack expresses pity for Rose, saying that her suicide attempt made him think ‘what could have happened to hurt this girl so much she thought she had no way out’. After this moment, Jack becomes the one person who Rose can confide in, and who has her best interests at heart.”

Check out the full example HERE and take a look at other examples including BLADE RUNNER,500 DAYS OF SUMMER, and ETERNAL SUNSHINE OF THE SPOTLESS MIND. (If you’re a highly literate graduate who would like to gain experience like this with us in a virtual internship that you can complete from home, apply here.)

To see the full industry-standard format we use for Development Notes, either commission your own (CLICK HERE) based on the script you submit, or purchase The Confidential Studio Manual to get the inside track on how the industry will really assess and process your script (CLICK HERE)!