Still polishing your script for our Fall Contest one-week extension? Need some tips for this and our next contests? From the contest entries we’ve already seen over the last year, here’s what we believe the most writers need to hear right now: crafting character through actions… 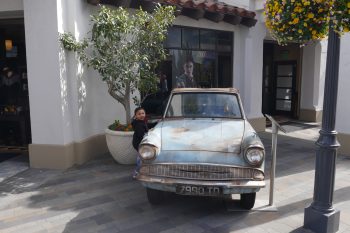 Even cars can have a character – like the Ford Anglia from Harry Potter and the Chamber of Secrets!

Creating interesting characters is an important skill in any kind of writing. Not all characters need to necessarily be likeable, but they do need to engage us. Otherwise, we won’t care about what’s happening in the story!

Characters are what keep us invested in your script. The impact of any plot point depends on the potential outcomes it will have on the characters – that’s what determines the stakes. And it doesn’t matter how action-packed your story is if the outcome doesn’t matter to us!

So how do you go about creating unique and interesting characters? The answer is through actions.

The best way to demonstrate character is through the decisions someone makes in difficult circumstances. Faced with a life and death choice, how do they approach the situation? Do they approach it head-on and brashly, or do they try to think their way out? Do they crumble under the pressure or thrive under it?

And it’s important that the situation is a difficult one. Choosing between a donut and a piece of cake isn’t an important choice – the stakes aren’t high enough. Choosing whether to run away from a fight or meet your enemies head-on? All of sudden, things matter a great deal more.

A lot of the scripts we read try to tell us who the characters are rather than showing us. Film is a visual medium, and as per the old adage: show, don’t tell! Have your characters make tough choices and put their skills to use. Don’t just tell us how clever someone is, show us.

This is also the key to creating unique and memorable characters. Consider Indiana Jones as an example. Plenty of people would be (and, indeed, were) willing to put their lives on the line to fight Nazis. That decision isn’t what makes Indiana Jones one of film’s great heroes.

But to chase down a truck on horseback, leap aboard, be kicked off and dragged behind it, before finally managing to wrest back control – and all for an archaeological artefact? The number of people who would make that choice (let alone be able to pull it off!) shrinks significantly.

So for those of you still making last-minute choices to your script, remember these key points. Your characters are what keep us invested in your script, and the best way to demonstrate character is through actions.

Don’t make life easy for your characters. Put them in difficult situations and force them to make tough decisions. Your script will immediately come to life!

Once you’re ready, don’t forget to enter our Fall Writing Contest! We extended the deadline to this Sunday, October 18th – click HERE to enter now!