2nd place in our Summer 2020 Writing Contest went to an action-adventure TV pilot based on a 1904 Penny Dreadful that created fiction’s first modern superhero: SPRING-HEELED JACK by Nicholas Horwood!

Nicholas has won a year of free script development worth up to $3200, guaranteed pitching to industry, and more. See below to find out more about SPRING-HEELED JACK and its writer.

And don’t forget to enter the WriteMovies Fall 2020 Screenwriting Contest if you’d like a shot at winning these prizes yourself – or enter our Horror Award and get free entry to the Fall Contest!

Here’s what SPRING-HEELED JACK is all about:

The year is 1826. 12-year-old JOHN DACRE is the spoiled son of Lord and Lady Dacre, living on his parent’s estate in India. On their return to England, however, John’s parents are murdered by a mysterious assassin and John ends up on the crime-ridden streets of London. Here he falls in with an exotic mix of characters, including a troop of circus acrobats.

Ten years later, John – now called JACK – is a highly-skilled jewel thief (know to Scotland Yard as ‘Black Jack’) who robs from the rich and shares his spoils with the poor. When he learns that his uncle was behind the killing of his parents, he turns to retired army quartermaster and inventor Algernon to assist him in getting revenge.

Algernon equips Jack with a number of cunning gadgets – including a pair of boots that amplify Jack’s already impressive agility – transforming Jack into the costumed vigilante soon to be known as SPRING-HEELED JACK! 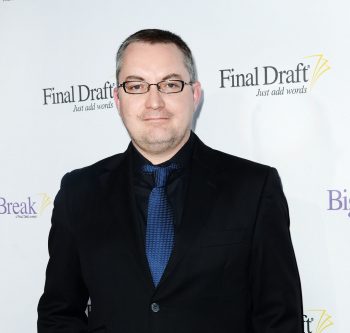 Nicholas Horwood is an award-winning creator of dark genre stories (with a hidden past as a comedy writer). His horror script THE GOOD PEOPLE was selected for the 2011 Brit List and his dark comedy FUNDAY was nominated for a BAFTA. He has been chasing his dream of becoming an A-list Hollywood screenwriter for 15 years, but isn’t sure 2020 is the year to be optimistic about life goals.

Trivia: He was once introduced to Johnny Depp, but mistook him for a Johnny Depp impersonator.