MONGER got our attention straight away with a unique concept and setup. The plot and the monster that haunts the protagonists both feel fresh, and with well-rounded characters we quickly came to care about, the suspense was high throughout. Congratulations to the writer of MONGER and the first ever winner of the WriteMovies Horror Award, David Axe!

As the WriteMovies Horror Award 2019 winner, David has won guaranteed pitching to industry, two sets of Development Notes, and further advice on honing his script from our screenwriting experts. He’s also still in contention for our Fall 2019 Screenwriting Contest; Quarter-Finalists will be announced on Friday November 15th!

Here’s a summary of MONGER:

Two ex-U.S. Army soldiers, both veterans of brutal combat in Afghanistan, hike into the American wilderness to take some drugs, drink some bourbon and get right with themselves and the universe. But something follows them… and it has other plans. 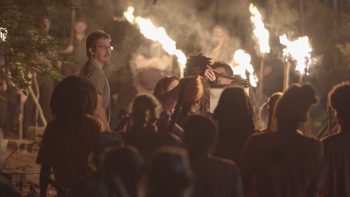 And here’s a quick bio of the writer of MONGER, David Axe:

MONGER writer David Axe is a filmmaker and journalist living in Columbia, South Carolina. The author of several graphic novels, he also wrote the 2017 indie thriller THE THETA GIRL and has written and directed several short and feature films including SHED (2019) and LECTION (2020).