Horror Stories: PSYCHO and learning from the classics

We’ve extended the deadline for our Horror Award until Sunday! We’re celebrating the contest with articles about our favorite films and TV shows in the genre. Find out what scares us the most… and what we’re looking for from a horror script! Next up: PSYCHO (1960)…

Staying up to date with the industry is vitally important for any screenwriter. Knowing what’s selling – what genres and styles are popular, what audiences are enjoying, and what producers are willing to put their money behind – increases your chances of seeing your scripts get into production.

But there’s also a huge amount that can be learned from the classics. After all, they’re classics for a reason! Anyone who ignores them because they’re too busy following recent trends will miss out on a huge wealth of knowledge. 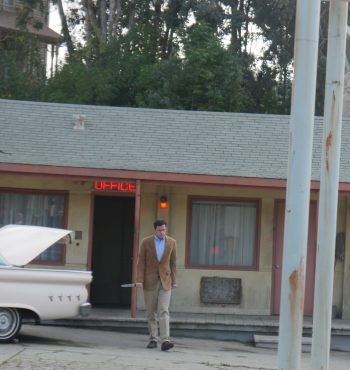 And if you’re looking for horror classics, where better to start than with the 1960 film PSYCHO?

Pulling off twists and turns is often an important part of horror. It’s inevitable that characters are going to befall horrible fates, and keeping us on our toes as we wonder who’s next and how is a real art. Few stories have done this as well as PSYCHO, which boldly kills off its established protagonist after the first act, sending a very clear message: nobody is safe.

Of course, a huge part of PSYCHO’s brilliance is down to the direction of Alfred Hitchcock. His choice of shots, the use of lighting to create dark shadows, and the repeated motif of reflections to imply the dual personalities of Norman Bates – all this combines to create one of the tensest atmospheres in movie history.

(If you don’t believe us, just take a look at Gus Van Sant’s 1998 “shot-for-shot” remake, where the motifs are absent and the lighting is different – leading to a dull, lifeless imitation that fails to realize the purpose of Hitchcock’s original shot selection.)

It all starts with the script, though. Every great film does! And where PSYCHO also excels is in its psychoanalysis of antagonist Norman Bates, reaching an understanding of a broken mind in a way that few other films have been able to. Horror has given us a great many serial killers and psychopaths over the years, but few have felt quite so keen as PSYCHO.

In fact, the story’s structure seems to mimic his state of mind. Marion’s death signals a break in personality – the person we thought we knew is gone, and from that point on we have a more fractured narrative following a number of different characters.

The truth starts to become blurred, too. What started as a story about stolen money has transformed into something unrecognizable, a twisted world where we can’t predict what’s coming next as we delve deeper and deeper into Bates’ state of mind.

The classics have a lot to teach us. Sixty years after PSYCHO first shocked audiences, it’s still a powerful movie full of great storytelling, and an absolute must-watch for fans of the horror genre.

IAN ADDS: I believe that each successful piece of writing has at its heart one thematic question, and one plot question, which is a “what’s going to happen” question. The focal plot question is what I refer to as ‘the central question’; the thematic question is really the same question, just expanded into something more abstract and universal, which addresses some key aspect of life that anybody can relate to. 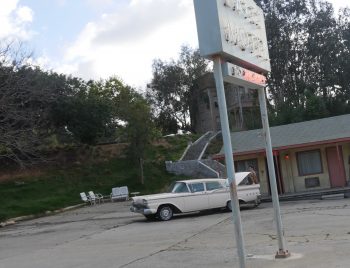 Norman Bates gets to grips with a new victim, at Universal Studios Hollywood

When explaining this, I have shown dozens of writers in many sessions and classes that PSYCHO is the exception that proves the rule! The central plot of PSYCHO appears to be about a woman who robs from the bank she works for and goes on the run – implying a central plot question of “Will she get away with it?”. But then – at the halfway point of the film – with no warning or explanation – she is brutally killed by a man, and that question appears to go out of the window, leaving us stunned and bereft, our expectations unfulfilled and now unfulfillable.

Except that this utterly shocking act leaves us with exactly the same central question, with only one change: “Will HE get away with it?”. It’s the evolution of the first storyline – as the hunt to catch her finally gets moving – which ultimately leads to the resolution of the second. So, while the structure and shock of PSYCHO will always be one of the most unique moments in cinema history, even this remarkable counter-example still justifies the greater truth: that every successful piece of writing is unified by one central question, even if it seems not to!

For more insights like these to apply to your own writing, subscribe to WriteMovies Academy, for a virtual film school you can complete in your own time: click here to find out more! And, if your own horror script is ready to stun the world, submit it to our Grand Prize or our Annual Horror Award – click here to see more!