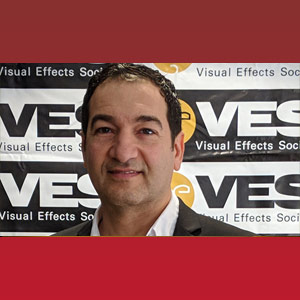 The bleeding edge of BLADE RUNNER 2049: VFX expert Habib Zargarpour talks about his work on a sequel that’s been 35 years in the making!

In the first part of our interview series in the run-up to the release of BLADE RUNNER 2049, Ian Kennedy asked Habib about the most long-awaited sequel we could think of, building on the most influential visual effects of the 1980s, and why he thinks 3D Laser IMAX is the best way to watch it…

IAN: The original BLADE RUNNER had maybe the most influential visual effects of the 1980s – making the new one must be a dream VFX job, but a lot to live up to!

HABIB: The original BLADE RUNNER is the reason I got into the industry, it made me want to do what I’m doing, it was the inspiration – similar to a lot of other people, I’m sure. It’s been also my favorite film of all time, I caught on to it late after it had already released, I saw it on video and on a director’s cut at an ArtCenter screening in Pasadena. I found out about Ridley Scott but also discovered Syd Meade, the designer originally hired to do the vehicle designs but who ended up filling his paintings with these amazing backgrounds of futuristic art-deco dark-future LA. A lot of his designs are infused in the movie, and I heard that he’d attended ArtCenter College of Design, so I made it my mission to go there. I was really happy to be accepted there, and I was able to attend this pretty rigorous program of training. I joined the Industrial Design curriculum, which includes transportation and product design. After graduating I kind of tripped into film by accident by just taking a summer job designing for a film, and the rest is history. I ended up going to Industrial Light and Magic [Lucasfilm’s awesome VFX and animation studio]. After a few years, there was an ArtCenter alumni dinner, and I got to meet Syd Meade, and Michael Bay who is another alumnus. We met when Michael Bay was doing Armageddon, I also got to meet him on set through Alex McDowell, the production designer.

John Nelson and I first met when I was nominated for A PERFECT STORM and he was nominated for GLADIATOR, we were competing against each other, I was able to win the BAFTA for A PERFECT STORM but he won the Oscar for GLADIATOR so it was an interesting year! We’ve been great friends ever since, sharing stories – we’ve always wanted to work together and this was a great opportunity. Being able to work on the new BLADE RUNNER was coming full circle for me, because it ties me straight back to what got me into the field in the first place. I was extremely happy when John gave me a call about it – we’d actually been talking before last summer [2016], and I was going to be joining him on the project earlier but for various reasons that didn’t work out. But then I got to join them in postproduction [as VFX Consultant] to help them out because they had tons of work to do and the schedule had been pulled in.

I think the greatest thing about working on the project with John Nelson is to work directly with Denis Villeneuve, the director [also of ARRIVAL, SICARIO and others], and collaborating with him. He’s a great visionary, one of the best directors that I know in terms of knowing exactly what he’s looking for and having a vision and sticking to that. Between him and the DP [Director of Photography] Roger Deakins, both of them were very steadfast in sticking to the plan and making sure everything aligns to that. The film had 7 visual effects houses working on it from around the globe, which is a lot! And so John Nelson and I were splitting the work of overseeing all of that. I was brought in as a consultant, we split the reviewing of individual shots, we would also do a ‘shot triage’, looking at various shots that we thought could have been better and analyzing them together, pulling up Photoshop and trying painting over certain things and adjusting certain things, just seeing what our intuition said would work. It was a great collaborative thing to do, we did something like 500 shots of paintovers for alterations to send to the vendors. The schedule was really compressed. We would get feedback from the director and DP, it takes time for a complicated shot to be turned around with the notes, in terms of the things that have to happen to it, because it’s so complex. So we would use the paintovers as a way to get input from the direction [team], so when they had a comment on a certain element, let’s say the sky, we would iterate with them until they were happy, and then send it to the vendor for them to change it. This technique proved to be really efficient, it also helped John and I see what would help and what wouldn’t help on a certain situation, it became a useful technique for adjusting things. There was a very particular direction and style for how the sky should look and how the world would look, and all of those things needed adjusting over time – how the atmosphere feels, how the lighting in general would feel. All these things we would adjust, the DP and director would have comments or revisions on them. Sometimes if something wasn’t looking quite realistic, this would go through the paintover triage too. John had some great tricks up his sleeve that he would try, and I would chip in with some other ideas, so the collaborative side of it was what worked well…

Habib and John Nelson during their time working on BLADERUNNER 2049.

The VFX crew we were working with, all the various vendors we were collaborating with, were all really top-notch, they were doing really bleeding-edge work, and so that was another great aspect of it for me, was to be able to collaborate directly with those supervisors and crew, every facility was bringing their top people to the crew, everyone was really passionate about this project. There are also miniatures mixed in with CG on some situations, that was a bit of a homage to the original, to keep a foot in that world, a tangible item, things that could have a certain look to it, and then also many digital shots as well.

I think it takes the feeling of the original and takes it even further, especially in terms of how it impacts the audience emotionally, with how the city felt, how the world felt, and what it would feel like 30 years later. I think it not only picks up from there [the original BLADE RUNNER] but I think takes it to a great place that’s very plausible. And that’s a lot to do with how Denis and Roger really stuck to their vision, and getting that oppressive feeling into all the shots and sticking to it.

IAN: So I’ve gotta ask. Is Deckard a replicant? Are we finally gonna get the answer to questions like that?

I definitely can’t say! The trailers are interesting, I was initially afraid they’d be giving too much away, but I think the film has enough intrigue, and I’m hoping audiences will go see it regardless and enjoy it. It’s truly a great story and I think that having screened it a few times in 3D screenings, Denis has done an amazing job to pull all these elements together to really create something that takes the original above and beyond, and pulls you back into that world, and gives you a lot to chew on. It’s definitely the sort of film you’re gonna want to watch more than once – figure it out and figure out amazing things. The visual and audio treats are gonna make you want to do that anyway because of seeing all that come together in the film, with an unbelievable soundtrack and music. I hope the film brings new fans to see the original if they haven’t already, once they’ve seen this. Also I think fans are gonna love how that original vibe and sense of being in that world is not only kept and continued but also accentuated, it really does a great job of that and that’s thanks to the discipline from Denis and Roger to stick to the plan and vision.

IAN: Were there any differences between Ridley Scott [now a producer not director on this one] and Denis about what direction to take it in?

I was brought in in postproduction, from what I’ve seen I think Ridley Scott and Denis were very aligned, I think everyone’s very happy with how it’s turned out.

IAN: The great thing of the original is how it divides opinions between people who love it. I’m guessing there’s things here that’ll keep the flames burning another 35 years!

HABIB: Hopefully if they’re gonna make another one it’ll be sooner, it’s a long time to wait!

IAN: I can’t think of a longer-awaited sequel, can you?

HABIB: No, no. And for me it was just such an amazing experience on many levels, including finally getting to work with John Nelson who’s just an amazing visual effects producer who’s worked on GLADIATOR and IRON MAN, massive projects. He’s got an amazing eye for detail and really understands how to take what we’re making and do what’s necessary to make it work. That was really rewarding for me to learn from him, how his approach would solve things. I hope me working with him was helpful and ended up making things better. My official title on this film is VFX Consultant (Post-Production).

Well I can’t wait for you to see BLADE RUNNER 2049, it’s a huge treat, I’ve seen both [the] 2D and 3D [versions]. I’ve always been a proponent of 3D, but for many movies I’d always prefer the 2D. For this one, I was surprised, I thought I’d like the 2D better, but the 3D team’s done a great job with how they’ve done this, there’s nothing in your face, it just draws you into that world. The best version I’ve seen is the 3D Laser IMAX, it’s unbelievable clarity and brightness, it really pulled me in. There’s something about being drawn into film. When you put on the 3D glasses they have the effect of isolating the room away in an interesting way, so you forget where you’re sitting, and that for me enhanced the film even more. You’re dealing with the imagery – the way the world’s moving – to have the next step there and get pulled into it. The regular IMAX 3D was good too! Let’s touch base when you’ve seen the film, I want to know what you think!

IAN: That’d be great, thanks!

In the next part… Habib reveals how his teams achieved such awesome effects in A PERFECT STORM, TWISTER, STAR TREK: GENERATIONS and many other films!