The winner of our latest Horror Award is a tense tale that combines the frights of a creature-feature with serious emotional weight of seeing someone you love turn on you: THE CORRUPTION by Alyssa Stevens!

Alyssa has won two sets of Development Notes, guaranteed pitching to industry, and more. See below to find out more about THE CORRUPTION and its writer.

If you want to win great prizes like these, enter our current award: the Romance and Comedy Award 2022! All submissions also get free entry to the WriteMovies 2022 Writing Contest, which is already open!

Here’s what THE CORRUPTION is about:

Spencer and Cassidy Quinn are a couple in a strained marriage. Moving to a ranch near Carbon Creek, they grow further apart as Cassidy’s job takes her out into the woods on her horse, Riley, while Spencer spends his time trading stocks in a bid to make big money.

Soon, strange things start happening. Cassidy hears screams and growls late at night. Bloody corpses of animals are thrown on their porch and piled inside their barn. Huge flocks of vultures appear to be attracted to the house. And Spencer… Already emotionally abusive to Cassidy, he just gets meaner and more dangerous. He holes himself up in his room all day, physically and mentally decaying.

Cassidy learns of The Carbon Creek Corruption, a local legend about a creature that preys on the selfish, possessing them and rotting their souls from the inside out. As Spencer and the creature become intertwined, events spiral out of control. Cassidy is hunted in the woods; people disappear and are brutally killed. To save herself and those close to her, Cassidy must find a way to defeat the creature and her murderous husband. 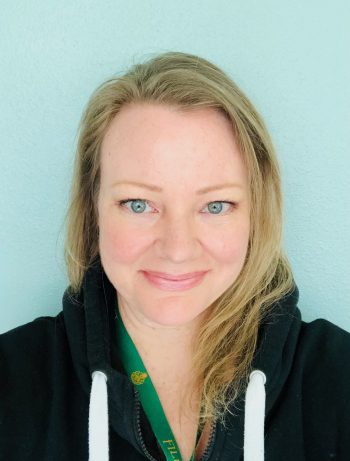 And here’s a quick bio of THE CORRUPTION’s writer, Alyssa Stevens:

“As a latchkey kid, I was left alone to watch and read all sorts of horror, action, and romance novels and movies that influenced me from an early age. I’ve had a hell of an imagination ever since I can remember, and would spin tales in my head to pass the time. Finally, I started putting those stories on paper – first as books, then as screenplays.

My first novella was published in 2015. I wrote my first screenplay in 2020 and haven’t looked back since. I write genre scripts featuring smart, fierce women leads.

In addition to being a writer, I’m a baker, a rescue horse mom, a kidney donor, a lover of 80s horror movies and 90s grunge, and an abuser of comma splices. I went to Cal Poly SLO where I studied psychology and flunked journalism. You can find me on Twitter posting silly memes and pictures of my horse.”