END_OF_DOCUMENT_TOKEN_TO_BE_REPLACED

It’s one of the most exciting moments of the year for us here at WriteMovies… Yes, it’s the moment we get to announce the winners of our most recent competition: the Spring 2019 Screenwriting Contest!

END_OF_DOCUMENT_TOKEN_TO_BE_REPLACED

When we announced our Quarter-Finalists, we said at the time that the bar had never been higher. The same is certainly true for our Semi-Finalists; what an amazing bunch of scripts! Congratulations to everyone who has made it through to this stage of the competition!

The standard here was so good, we had an incredibly tough time choosing which scripts were going to make it through to the next round. With so many fantastic stories to pick from, you’ve never made our jobs so difficult – or so enjoyable!

When judging scripts, we keep a lot of different things in mind. The uniqueness of the concept, the quality of the writing, the structure and execution of the story. But we’re also looking at potential; with a year of free script development as a prize for our top three, we’re looking for scripts that can go even further and be taken to another level.

If your script didn’t make it through this time, it’s hard not to feel disappointed – but you should remember just how tough the competition has been . Even making the Quarter-Finals of our Spring 2019 Screenwriting Contest was an achievement, so well done!

As ever, if you’re not certain why we haven’t put your script through to the Semi-Finals, we’d recommend that you buy one of our Script Report services. That way you can get professional standard feedback on your work – and get free entry to our next competition, the Fall 2019 Screenwriting Contest which is now open for submissions!

And so, here we announce a group of scripts that we couldn’t be more proud of. Ladies and gentlemen, here are the WriteMovies Spring 2019 Screenwriting Contest Semi-Finalists!

Finalists and Winners are due to be announced on August 16th – watch this space!

It’s time for more Winter 2019 Screenwriting Contest results! There were a lot of great scripts in our Quarter-Finals and it was tough to make this next round of decisions, but after careful consideration our judges have decided on our Semi-Finalists!

There’s often a fine line when it comes to the different rounds of our screenwriting contest. Some scripts only just miss out, and it can be difficult to know why. A lot of the time, it comes down to the execution of basic elements – structure, characters, and dialogue.

Take a look also at this article that our Director, Ian Kennedy, wrote when we announced Quarter-Finalists: What your writing submissions are telling us, 2017-2019. If you’re making any of these mistakes, they could be holding you back!

But what else have we found with these latest Winter 2019 Screenwriting Contest results? Well, a few things that have often helped our Semi-Finalists stand out from the rest:

And with that, it’s time for the moment you’ve been waiting for. Here are our next Winter 2019 Screenwriting Contest results: the Semi-Finalists!

Keep an eye out for more Winter 2019 Screenwriting Contest results from us, as we move on now to judge our Finalists and winners – and decide who takes away the Grand Prize!

Thanks for all your support during this contest cycle! This is where it gets exciting – first Winter 2019 Screenwriting Contest results and a chance to share our judging findings and reasons with you. Whether you submitted or not – this is worth reading on about. END_OF_DOCUMENT_TOKEN_TO_BE_REPLACED

Today we look back at the winners of our Grand Prize from 2018 and reveal our full Wall of Fame 2018! If you’d like to see your name on next year’s Wall of Fame, enter our Winter 2019 Contest for a chance to come out on top – as well as the chance to win our Grand prize of $2500 in cash! 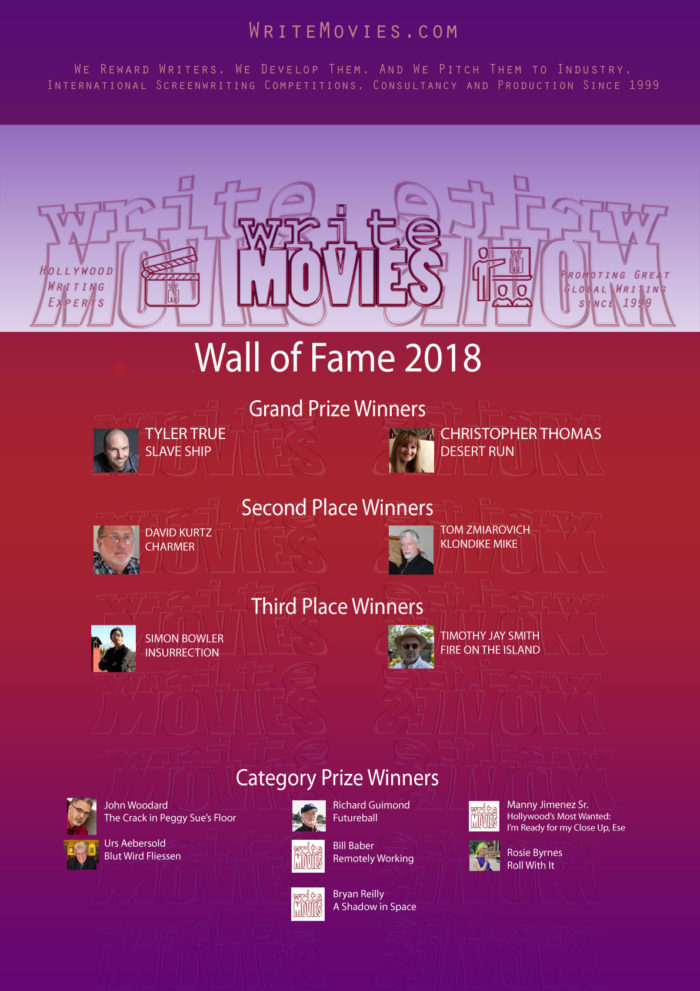 Here’s some more info on our Grand Prize winners from 2018. All of our winners received a year of free script development with us and we’re now working hard at polishing them to perfection!

Wish you’d been featured on our Wall of Fame 2018? If you think you’ve got a script that will take you to the top, be sure to enter our Winter 2019 Screenwriting Contest! Closing on January 13th 2019, this might be the last time we run a major competition of this kind… And with an increased cash prize of $2500, this is an opportunity not to be missed! 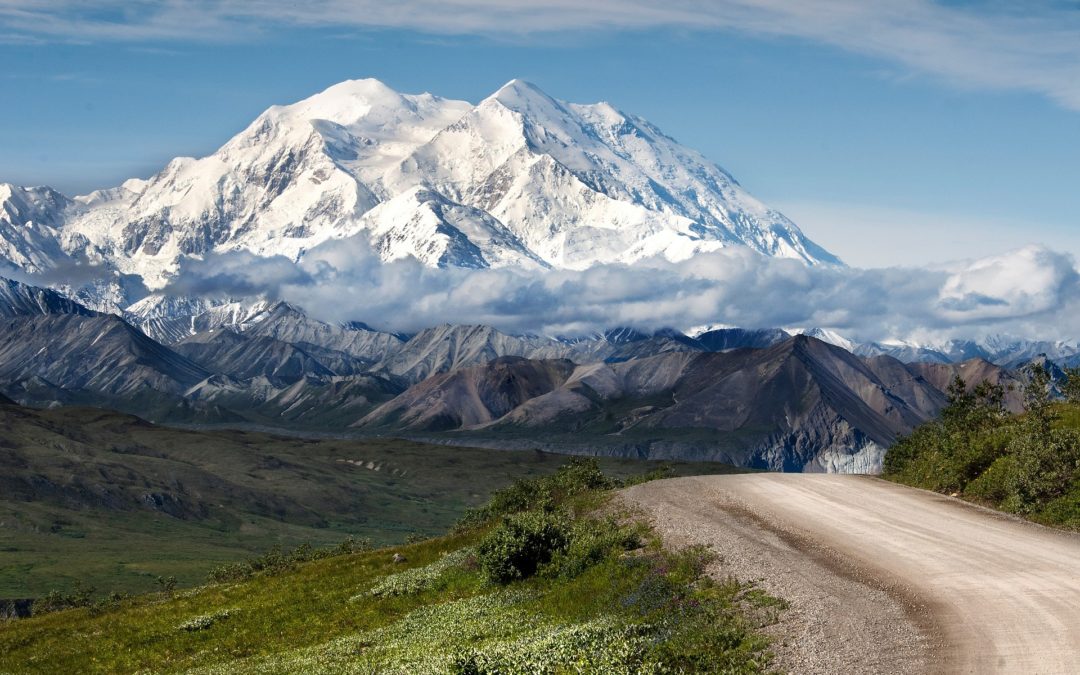 We’ve got another great script to present to you! Our Spring 2018 contest 2nd place script is KLONDIKE MIKE by Thomas Zmiarovich!

This hilarious family comedy has an unusual Alaskan setting, lovable characters, and brilliant set pieces that will have you roaring with laughter. A big congratulations to Tom for his win; he receives Development Notes, previews of our Virtual Film School, exclusive prizes from InkTip, and more! Read on to find out more about this script… 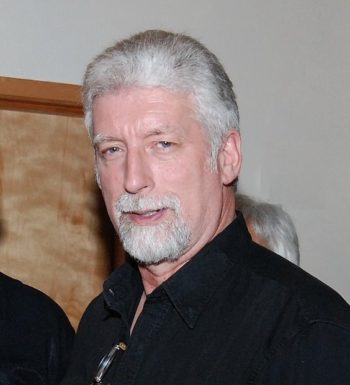 Here’s the logline for KLONDIKE MIKE:

And the writer’s summary of his script:
In this adventurous family comedy, Sam McCord inherits a gold claim and decides to put his dead-end job with a corporate mega-store chain on hold and move his dysfunctional family to Alaska for the summer in hopes to strike it rich and solve all his problems.

Virtually dragging his wife, 16-year-old son and 9-year old genius daughter to the wilds of Alaska, he soon realizes that he knows nothing about working a gold claim. At a local saloon, Sam meets Klondike Mike, a rustic, flamboyant, vagabond lady’s man prospector, who convinces Sam he’d make the perfect straw boss to run the claim. With no other options, Sam hires him, and under Klondike’s direction the claim is soon running like clockwork. So, what could go wrong?

For Sam, everything – from pesky Yellow Jacket attacks, feisty raccoon encounters, cell phone-outhouse mishaps, Magic Mushroom trips with a cookie eating Grizzly bear, and the underhanded dealings with the Bible thumping claim jumpers trying to steal Sam’s claim back. Not to mention, Sam’s worries that his children admire Klondike more than him.

Thomas Zmiarovich Bio:
Born in Seattle, in the shadow of the aerospace giant, Boeing, my love for movies began as far back as I can remember. From the age of 10, much of my paper route money found its way to the cheap, week-day, matinees in summer at the Columbia City theater, a mile walk from my home on Beacon Hill. Sci-fi, comedy, action, you name it, I could have lived there if I could.
As an adult, I never lost that love of the big screen. Even as I raised a family and worked as a Tool Design Engineer, for Boeing. I always dreamed that I had something to contribute to the craft I loved so much.

Through the years, I wrote my stories and scripts, developing and learning the craft of writing and story-telling from names like Stanley Kramer, Abby Mann, Michael Hauge, Richard Walter, and others. I’ve had scripts finish in the quarter and semi-finals at Nichol, Austin, and others; am a finalist with Script Pipeline and the Washington State Screenplay Competition; and have had numerous Top Ten finishers.

My love of story telling will never allow me to stop trying to get those stories to the big screen for all to see.