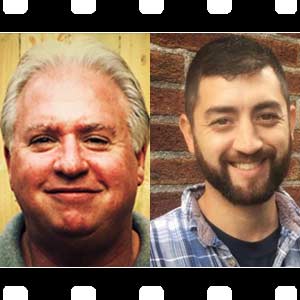 Let us introduce our Summer 2017 Screenwriting Competition Second Placed Winners – FOR LOVE OF COUNTRY by Ron and Tony Basso.

Ron and Tony are the second collaborative winners since our 2016 relaunch, and the first father-son writing team! They showed the love for screenwriting in FOR LOVE OF COUNTRY which earned them second place in our Summer 2017 Contest. For coming in second Ron and Tony receive a year of free script development, guaranteed pitching to industry and exclusive prizes from InkTip.

Here’s a little background on Ron and Tony…

Ron Basso: Ron is bit of a renaissance man. Among his many pursuits is screenwriter. He specializes in historical dramas; he looks specifically for unknown or minor characters and their backstories to historical events.

Born and raised in Richmond, Virginia, he has spent all but three years in the Commonwealth surrounded by historical sites that established this nation. He is currently working on a new full-length feature, and looks forward to more opportunities to share untold stories of our past.

Tony Basso: Tony is a soccer coach and EMT currently residing in Portland, Oregon. He has served on the coaching staffs of national, collegiate and local programs. His passion for screenwriting began while editing his father’s screenplays. Now, fully bitten by the screenwriting bug, Tony is working on various projects in his spare time.

In addition to For Love of Country, Tony is writing a 10-part mini-series on the lives of these spies and how their bravery and courage helped save the nation.

And here’s their logline to FOR LOVE OF COUNTRY…

70 years after an extraordinary true story of freed slaves volunteering to return to the South to spy on Confederate military forces, one spy questions if it was worth it.

For coming second in our Summer 2017 contest, they receive a year of free script consultancy, InkTip publicity bonuses, intensive pitch coaching and GUARANTEED pitching of their script to industry.

Will you follow in Ron and Tony’s footsteps in our latest contest? Click here to get your chance!