Second Look: Game of Thrones Season 1, Episode 5 – The Wolf and the Lion 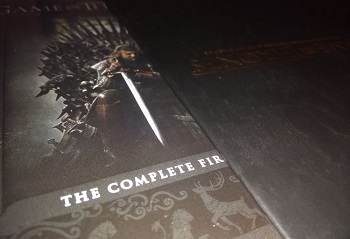 In readiness for the eventual arrival of the final season, Ian Kennedy subjects himself to the whole thing again. Next up is Episode 5,The Wolf and the Lion. Can anyone endure Ned’s honor, Stannis, the Red Wedding, and – worst of all – Arya’s unending journey from ‘annoying’ to ‘a different kind of annoying’, all over again? Or will the quality of the writing conquer all foes once more? Spoiler central here, if you hadn’t guessed… but in euphemisms that would make Tyrion blush, most of the time.

Episode 5: The Wolf and the Lion

Praise needed here for the title sequence – cost over $1m, apparently, and endlessly watchable, as the locations of the series unfold themselves in fascinating 3D configurations.

The idea of a Clegane-off happening in the final series has been gaining pace among GoT fans, but we actually got one right here in Season One, as the Hound steps in to prevent the Mountain – his brother – from murdering the knight he just lost a joust to. Two oversized monster-men in armour fighting, when we’ve lately heard that it was the Mountain who gave the Hound his huge facial scars as children. And this moment also shows us that – however horrible he might seem now – the Hound will end up on the right side eventually.

The violence steps up several levels early in this episode, and we get our first real fights. For the first time we’ve seen, King Robert gets directly involved in affairs of state, and has a rare heart-to-heart with his wife Cersei – not for the better. The king hears of Dany’s pregnancy, and tries to get her killed – and the ever-honorable Ned resigns his position rather than fulfil the request. Catelyn discovers her sister is not the woman she was – an almost surreal scene as Lyssa suckles her overgrown child. After some chicanery from Littlefinger, Ned is caught out and Jaime and Ned get to actually fight each other! Awesome! But this is cruelly cut short in typical GoT fashion. A very enjoyable episode. And no Dany in it at all, which I think is probably the only time that happens.

If you liked Ian’s take on “The Wolf and the Lion”, take a look at his thoughts on Episode Three: “Lord Snow” by clicking here! or Episode Four: “Cripples, Bastards, and Broken things by clicking here!