Finishing in 3rd place for our Summer 2016 international screenwriting competition is a great achievement. Evan and his script BALLERINA GIRL fought off some high-quality scripts that ended up earning honourable mentions. Ultimately though, Evan and his script, BALLERINA GIRL, thoroughly deserved this placing and we are delighted to tell you all a little more about him.

1 Full year of script mentoring for the winners, including development notes on all re-writes of winning scripts. Worth $3,200.
Up to $1 million in option monies from the A-List producers we work with. If an established studio/production company with theatrical credits wishes to option the script, we will fly the winner to Los Angeles and pay (up to $4,000) for their accommodation. We will pitch the top three projects to relevant production companies (such as Neal Moritz Productions, Bruckheimer Films, Scott Rudin Prods.) & studios (Paramount, Warner Bros, Universal, etc.). You keep ALL the option/sales money. The names of the top three winners and their projects are mentioned in press releases and on the web. The third-place winner will receive our free Gold consulting package. Intensive pitch coaching to help you get immediate attention and stand out as a pro amongst the hordes of wannabes.

Here’s some background on Evan: 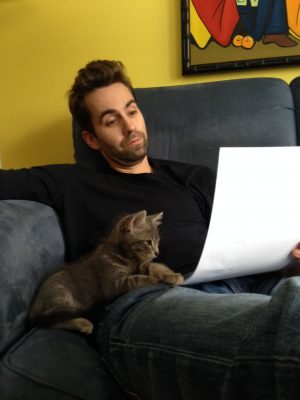 Originally from northern Canada, Evan Cooper has starred in more than ten Television commercials, hosted for Home & Garden TV (HGTV), and written numerous screenplays. His feature, Ballerina Girl, was inspired by his love and fascination with Russian politics and culture. Evan is particularly interested in writing films that include an ensemble cast and absolutely adores Downton Abbey. He currently lives in Los Angeles.

And here is a short synopsis of the third placed script, BALLERINA GIRL:

After a young woman is murdered in Moscow, the investigation takes a grisly turn when her brother pins the crime on Russia’s military elite.

Congratulations to Evan on his third placed finish!

Follow in Evam’s footsteps and enter in our current main international contest, the Winter 20116 screenwriting competition RIGHT HERE! Don’t forget that you can still get free entry to the Winter contest by ordering one of our consultancy packages – Judging Feedback for just $99, and Studio Consulting (only $129), with in-depth feedback from Development Notes at only $199!  And at a unique price of $399 you can get up to an hour of consultancy from a top studio executive with our Elite Consultancies. Our Deluxe Package is also available. The Deluxe Package consists of Development Notes, Studio Consulting and free entry to the Winter contest. And, of course, you’ll also be entered into the Featured Script of the Month automatically for no extra cost, too!