A classic romantic-comedy, DO YOU TAKE… drew us in with its warmth and humor. As the WriteMovies Romance and Comedy Award 2020 winner, Louise has won guaranteed pitching to industry, two sets of Development Notes, and further advice on honing her script from our screenwriting experts. She’s also still in contention for our Winter 2020 Screenwriting Contest; Semi-Finalists will be announced on Friday April 17th!

This is an exciting time to come on board at WriteMovies – we’ve been hard at work pitching our winners scripts, as you can see from the extracts we’ve been sharing from Ian’s L.A. Diary. Several of our winners scripts have recently been requested by top producers – we can’t wait to get DO YOU TAKE… out there too!

Here’s a summary of DO YOU TAKE…:

DO YOU TAKE… is a romantic-comedy set in Ireland, and a little bit in Italy.

After a financially precarious, constantly-moving childhood, Aisling is now a straight-laced accountant who knows what she wants – a fairytale wedding to a handsome Prince Charming and a stable, boring happy ever after. And she’s all set to get it. Until her fiance, Carl, gets cold feet 18 days before the wedding and insists they take a week apart to make sure they’re doing the right thing. A devastated Aisling is whisked off to Italy for the week by her exact-opposite sister Darina, a gay commitment-phobe who always has her sister’s back.

In Italy, Darina embarks on a signature short-term holiday romance and Aisling has a chaste but undeniably romantic liaison with Leo, a bohemian English lawyer-turned-saxophone player. When the week is up, Aisling arrives back in Ireland to find Carl has come to his senses and desperately wants to still marry her. The dream nuptials are back on and everything is perfect again. Until three days before the wedding, when Leo arrives in Dublin to declare his undying love. Now Aisling finds herself with two Prince Charmings – but which one is Mr Right?

If you’re a producer interested in this project, email talent@atalentscout.com today! 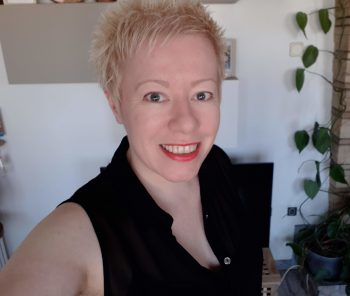 And here’s a quick bio of the writer of DO YOU TAKE…, Louise Geraghty:

As a native of Dublin, Ireland, I was raised in a nation of storytellers. Time spent living and working in England, Belgium and Denmark showed me that good stories travel everywhere. And a degree in Film and a training in Improv honed my skills. As did writing comedy, comedy-drama and animation scripts for production companies in Ireland, Europe and Australia. My go-to themes are Loyalty and Betrayal, and they are rich seams for mining in several genres. As well as romantic comedy I write feature-length thrillers and I currently have a comedy-drama TV series in development with a production company in Ireland.

If you want to follow in Louise’s footsteps and become one of our winners, enter our Summer 2020 Screenwriting Contest or Sci-Fi and Fantasy Award 2020 today!