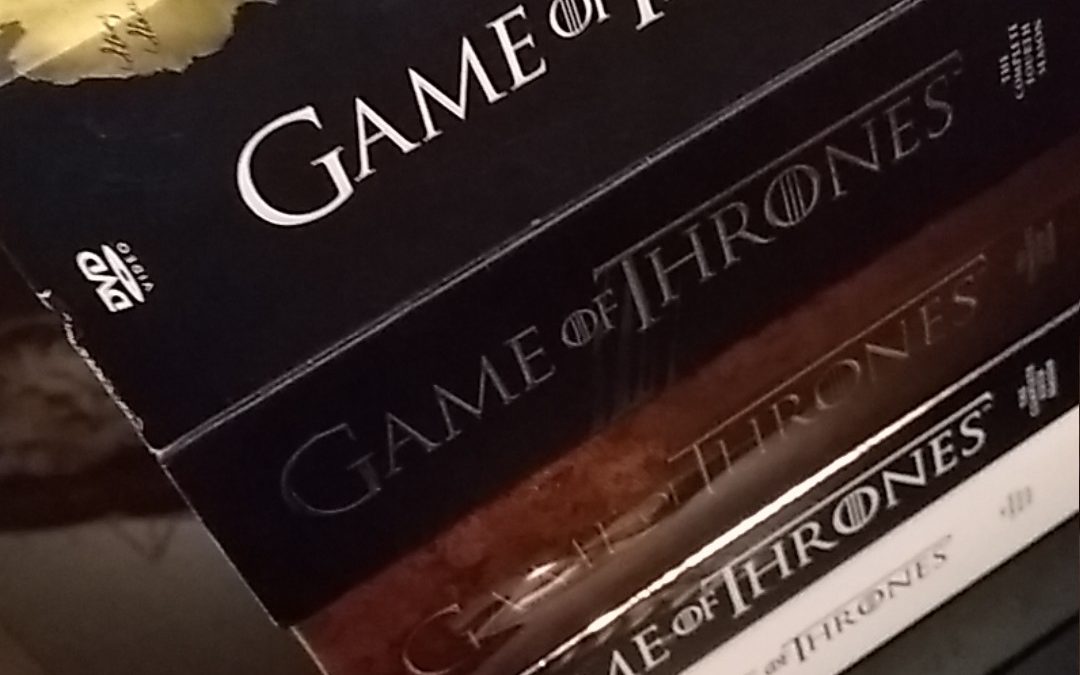 In readiness for the eventual arrival of the final season, Ian Kennedy subjects himself to the whole thing again. Next up is Game of Thrones Season 3… Can anyone endure Ned’s honor, Stannis, the Red Wedding, and – worst of all – Arya’s unending journey from ‘annoying’ to ‘a different kind of annoying’, all over again? Or will the quality of the writing conquer all foes once more? Spoiler central here, if you hadn’t guessed… but in euphemisms that would make Tyrion blush, most of the time.

For all the nudity and violations it inflicts on them, the prevalence of strong women characters is a huge strength of GoT. The arrival of Lady Tyrrell, played by captivating old stager (and onetime beauty) Diana Rigg, adds lovely wit and wisdom to the series – not that it was missing before. It’s interesting to hear how Catelyn blames herself for her family’s afflictions, based on an act of faith she once committed.

There’s wonderful use here of the medieval politics of marriage, which clearly overwhelm any sentimental connection we’d like to think they have to love (it’s particularly amusing watching Tyrion squirm as he arrives to reveal the plan for Sansa and himself, in front of his beloved Shae). There are DVD extras about this, and about religion in GoT. which deserves an essay in itself. Evidently, magical and mystical and inexplicable forces are at work here. Maybe even gods, not that we ever see them substantiated or corroborated. But there’s a much deeper indeterminacy and even relativism at work – every culture has its own gods (or god – though evidently not the merciful one we might recognize) but, as in Shakespeare’s King Lear, none of these well-crafted belief systems seem to do their owners any good. The most pragmatic solution seems to be Tywin’s, for now – “he believes in them, he just doesn’t like them very much”. The main embodiment of both religion and magic in the series is ‘the Red Woman’, Mellisandra, who goes to shocking, devilish lengths to help Stannis and others fulfil her visions – but even her visions aren’t proven to any significant extent.

Jaime’s character arc in this series is an interesting one. His experiences with Brienne give him some compassion and honor at last – and the moment he goes back to his old tricks is the moment that costs him his hand. In his turn, he gives a turning point to Roose Bolton, a key Stark ally.

Many important or recurring characters are still being introduced during this series, and many other passages make a lot more sense second time around now we recognize the characters and where they’re headed. Lord Bolton’s brilliantly sadistic bastard Ramsay puts Theon through his – admittedly deserved – miseries. The Brotherhood Without Banners show us the White Walkers aren’t the only ones who can raise the dead. The fallen Maester who treats Jaime’s wound gets an interesting journey over the coming years. Thormund and Mance Rayder and giants show us there’s more to Wildlings than disorderly tribal wild life; where the series puts us on a side, it never fails to show us there are good people and good humor on the other side too. Jon Snow’s love story with Ygritte is a very enjoyable example.

As we’ve seen in Ned’s life journey, winning battles and wars here doesn’t save you from falling prey to bitter truths. Watching the unravelling of Robb’s war – after winning all his battles – teaches us bitter lessons about the brutal logic of George RR Martin’s world. (Personally, I’m expecting a bitter conclusion, to reaffirm the anti-sentimental message of his storytelling in this series. He’s a master at building up our unwitting expectations, then savagely destroying our naïve hopes and expectations.) We’re well distracted by his other storylines – his love story and his wife’s pregnancy – and miss the bigger picture that’s staring us in the face.

Ah, we reach the ever-fatal penultimate episode of the series. After the Red Wedding, first time round, I was shocked and bereft like most people. But after ten minutes’ silence, I concluded that it was entirely right. This time? Yep. When you know what’s coming, it’s all the more glaring how much our own sentimentalism blinds us to what is totally deserved. Bitterly, but totally.

The final episode of the season is almost anticlimactic after that. But Ygritte gets to put a few arrows into Jon for abandoning her. I’m sure a lot of women can relate.

If you’ve liked reading Ian’s thoughts on Game of Thrones Season 3, you can read his opinion on Season 2 by clicking here or keep going and read his thoughts on Season 4 here!