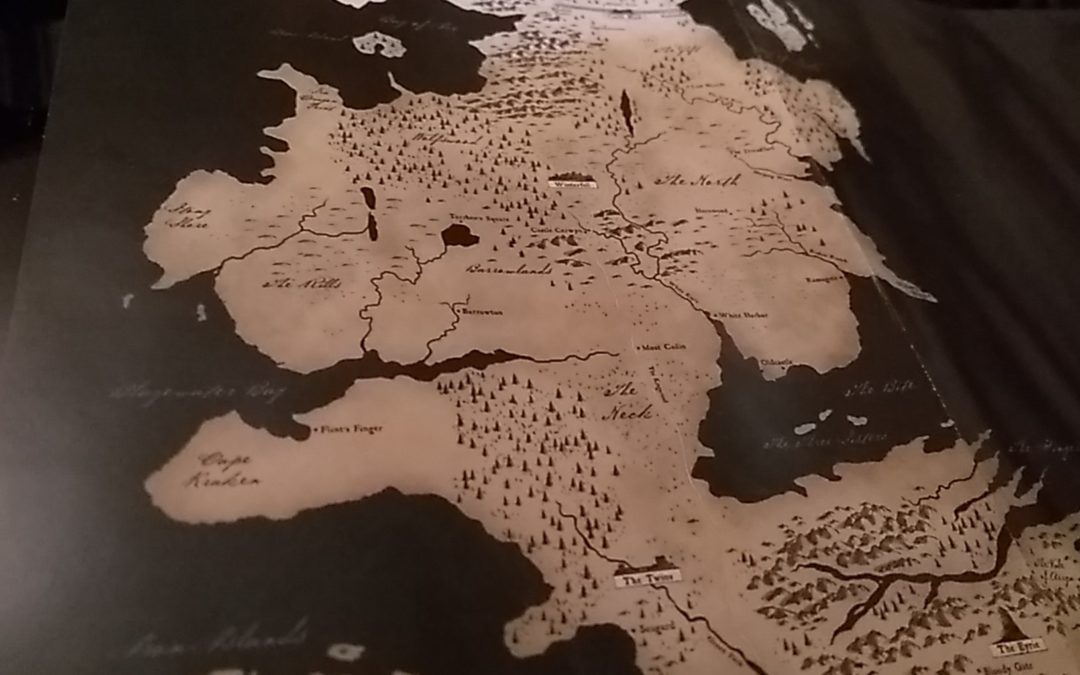 In readiness for the eventual arrival of the final season, Ian Kennedy subjects himself to the whole thing again. Next up is Game of Thrones Season 4… Can anyone endure Ned’s honor, Stannis, the Red Wedding, and – worst of all – Arya’s unending journey from ‘annoying’ to ‘a different kind of annoying’, all over again? Or will the quality of the writing conquer all foes once more? Spoiler central here, if you hadn’t guessed… but in euphemisms that would make Tyrion blush, most of the time.

GAME OF THRONES is a series of chaos. As soon as order prevails somewhere important, then something shocking comes along to throw it all in the air again there. Weddings are meant to achieve the opposite – but here are often the opportunity for untold horrors. Now, I’m not saying that sadist King Joffrey doesn’t deserve to die foaming at the mouth from poisoning at his own wedding. But considering the fates he inflicted on everyone else, it’s almost too clean and quick a way to go. His beloved crossbow, though, does have a few more important lives to claim after he’s gone, not least in the final episode. I guess it’s what he would have wanted.

This act triggers a big reshuffling – switches of allegiances, escapes and false convictions, and a chance for the perverse justice system of Westeros to play out again. The trial by combat fought in episode 8 (‘The Mountain and the Viper’) is still stunning second time around, and results in arguably the show’s most astonishing death. The way the fight pulls our heartstrings and shocks us throughout, is masterful. We hadn’t even spent enough time with either character to get genuinely attached to them. But it leaves us reeling.

One thing that makes it even more effective is that the show warmed us up for this duel a few episodes before with a very comparable duel, where a champion of Meereen provokes Dany to provide one. That duel has a sudden, unexpected and impressive outcome, that’s also emotionally satisfying. And maybe subtly shapes our expectations of the one to follow, ready for them to be confounded a few times over.

Tyrion’s ordeals in this series are the biggest storyline, tying all the other strands in King’s Landing together. Here the series lays bare the gap between how people are perceived to be, and their true character. Even Tyrion’s own father and sister have always assumed he must be a hateful creature, because his birth – and supposed monstrosity, as a dwarf – robbed them of wife and mother. She was his mother too, but they don’t care about that. And this season they turn their vendetta into a search for ‘justice’, as they exercise all their legal (well, corrupt) powers to punish him for Joffrey’s murder, even though he didn’t do it. But the series plays its usual tricks on them in return too. The richest and most powerful man in Westeros finally dies on the privy – a satisfying irony – and although Cersei’s unrepentant scheming doesn’t truly backfire on her until the next season, her refusal to learn from her mistakes is the true cause of her later humiliation.

As usual, episode 9 packs the biggest punch. The Night’s Watch are attacked on all sides and the battle for Castle Black and the Wall is impressive, and culminates the love-hate romance between Jon Snow and his Wildling fling Ygritte.

A duel between Brienne and the Hound is emotionally involving (first time around) and pretty ugly. On second sight, there are too many serious head injuries for a fight of this intensity to be sustained. We’ve got too used to seeing people clubbed in the head with rocks on our screens, seemingly without having any negative impact on them.

My main complaint is how quickly, and fully, Jon recovers – in this same season – from having three arrows in his body, a stab in the leg, and having his head pounded into an anvil. Seriously? I know we like him, mostly, but it’s unlike GAME OF THRONES to indulge our heroes like this.

Enjoyed reading this article on Game of Thrones Season 4? Take a look at Ian’s opinion on Season 3 by clicking here. Articles on future seasons are coming shortly!