Two college screw-ups who have taken a vow of chastity immediately fall for two women who want nothing more than to party in this send-up of Shakespeare’s Love’s Labour’s Lost. The winner of our Romance and Comedy Award is STUDY DATE by Alys Murray!

Alys has won two sets of Development Notes, guaranteed pitching to industry, and more. See below to find out more about STUDY DATE and its writer.

Want to become our next prize winner? The standard deadline for our Sci-Fi and Fantasy Award is this Sunday May 1st, so move fast and submit! You’ll also get free entry to the WriteMovies 2022 Writing Contest…

Here’s what STUDY DATE is about:

Certified bookworm Rosalyn Atkins has a problem. She’s lined up a perfect post-college job. Perfectly boring, that is. And faced with a future of soul-crushing work ahead of her, she worries that her years spent in the library and buried in her books have kept her from truly embracing the best years of her life.

Big Man on Campus Jake Baronne also has a problem. After dedicating himself to his role as a fraternity president and college radio DJ, he’s flunking out of school…and if he flunks, his father is going to take away the cushy job he has waiting for him after college.

Along with their two best friends, they each make totally separate vows. Jake will swear off drinking, partying, and women for his last semester of college, while Rosalyn will embrace all of the exciting hedonism that is the American collegiate experience.

But when these two meet, their spark is undeniable, and they both find themselves questioning everything they know about sex, studies, and themselves. 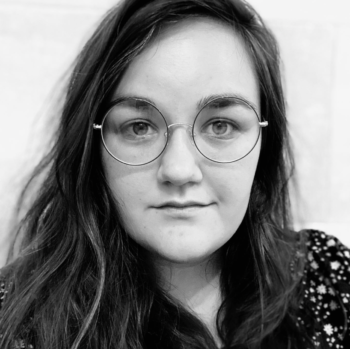 “I’d definitely describe myself as a genre writer with a romance problem. Whether it’s on space ships, in dark and gloomy castles, or in the middle of a battle with orcs, I love making characters fall in love. To me, romance writing is about hope — the hope of connection, the hope of community, and the hope of happily ever after — and don’t we all need a little bit of all three right about now?

Though I began studying playwriting at NYU’s Tisch School of the Arts and completed a playwriting program with the Jermyn Street Theatre in London, I moved to film studies for my Master’s at King’s College London. During that time, I fell in love with the romantic comedies of the 1930’s and 1940’s and decided to devote the rest of my life to bringing that same energy to the 21st century! I’m represented by Matt Felker and Norris Brooks at CAA for film and television as well as Maggie Cooper at Aevitas Creative for books. Now a full-time writer, I can be found chatting movies on @writeralys on twitter or instagram!”