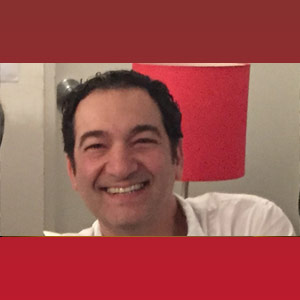 The eye of the storm: in the second of our series of VFX interviews, VFX expert Habib Zargarpour reveals how his teams achieved such awesome effects in A PERFECT STORM, TWISTER, STAR TREK: GENERATIONS, STAR WARS EPISODE I (THE PHANTOM MENACE) and many other films.

In the second of our series of VFX interviews, Habib tells our Ian Kennedy how to achieve natural disasters and why yogurt holds the key to VFX. His credits include two STAR TREK movies, STAR WARS EPISODE 1 (THE PHANTOM MENACE), THE BOURNE IDENTITY, JUMANJI, THE MASK, SPAWN and lots more so he must be onto something!

HABIB: I’ve had the chance to work on a lot of disaster films, especially natural disasters. For those we would work with storyboards but also with tons of real-world reference, which was difficult. People have seen on TV what tornados look like, stormy seas look like, how water looks, what fire looks like, things that we had very difficult but precise things to match to. There were other projects where we had much more creative freedom in the effect, for example on Star Trek, there would be maybe one concept art of the energy ribbon nexus effect in STAR TREK: GENERATIONS, then we would come up with what that would look like in 3 dimensions, how that would move, and what the colours would be, so that there’s a nice range there. Other times we would take, let’s say the tornado effect in Twister, turn it upside down, turn it around and that would be the rocket flow, you know? I equate it to making yogurt – you always need a little bit of [older] yogurt that helps to get the new one going, it saves you a bit of time, you know? And so for example, for A PERFECT STORM we had to do sprays and splashes of water, but we already had a particle system from TWISTER and we were able to do different things with it. How to we take things that are meant to simulate a dust storm and something that looks dusty and thick, and make it look like water vapor, make it look like a splash. There’s the physics of how all that moves, but when it comes to the look of it, there’s actually a lot of similarities between dust in the air and spray and water mist in the air, you study the difference. We added in light penetrating deeper which was able to scatter more, and that gives you the water splash. We had real water splashes to match to on set, and references of stormy seas – that kind of stuff’s really tough.

A still from one of Habib’s films, A PERFECT STORM.

Things have come a long way in 17 years since A PERFECT STORM. Software is able to simulate all the different components of water, it still takes a huge amount of time to run those things, but at least some of it’s more achievable all in one place, whereas back then we had to divide things up into elements separately so the machines could deal with it, and the artists, actually. We learned a lot from meteorologists and people who study oceans and storms, I don’t know whether they gained anything from us other than enjoying it visually. It’s amazing watching on TV these days, it’s a strange combination of things going on at the same time, like earthquakes and watching these hurricanes going on through all the time. At the time I was working on TWISTER I had trouble driving, because I would get distracted by cloud formations in the skies, sometimes I’d have to pull over and take pictures of it. That could be dangerous!

IAN: I bet! So – if all the directors and DPs and VFX people you’d worked with all separately asked you to work on their different projects at exactly the same time, who would you choose?

HABIB: Oh God! (laughs) That’s a really tough question. I think it’d be a tie between Denis [Villeneuve] and John Nelson. Denis is a really great visionary director, and I know whatever John Nelson does next is gonna be maybe perfect!